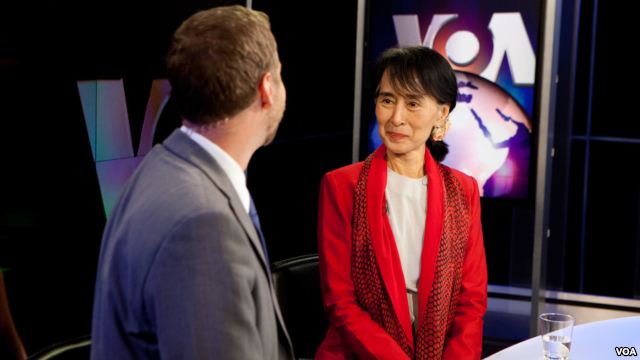 STEARNS: Thank you for being with us this afternoon. Our time is short, we’ll get right to the questions. Political and economic reforms in Burma are clearly not yet complete. What needs to happen next?

ASSK: We need to just go on with the process. We need to find out what we have to do in order to keep the democratization process on track.  Economic reforms have to be taken one by one. You see it’s not just speed that’s important, it’s sequencing as well. You’ve got to get the speed right; you have to get the sequencing right. Save to get the sequencing right. So we have to find out what next should be done. There is so much to be done.
STEARNS:  Keeping democratic reforms on track, what you think is the biggest impediment there?
ASSK:  I think it’s knowing what kind of reforms should come first.
STEARNS:  Do support United States lifting trade sanctions against Burma?
ASSK: Yes I do because I think it’s time we tried to stand on our own and I’ve been very grateful to the United States for what they’ve done to help the forces of democracy. I think sanctions of helped us greatly. There have been many claims that sanctions have hurt Burma economically, but I did not agree with that point of view.  If you look at reports by the IMF, for example, they make quite clear that the economic impact on Burma has not been that great. But I think the political impact has been very great and that has helped us in our struggle for democracy.
STEARNS:  Do you think that this process is gotten to the point now where the changes are reversible?
ASSK:  That I don’t think we can say until the Army is totally committed to change because under the present Constitution, the Army can always take over all parts of government if they think this is necessary. so until the Army comes out clearly and consistently in support of the democratic process we cannot say that it’s irreversible. But I don’t think we need fear a reversal too much either.
STEARNS:  You’ve spoken of the need to change the Constitution to remove the military’s guaranteed portion of seats in Parliament. How do you intend to go about that?
ASSK: I’ve never emphasized the military’s guaranteed proportion.  That’s what others of emphasized. That does not worry me so much as the provision for the commander-in-chief to take over the powers of government when he thinks necessary.  And of course there are other parts of the Constitution which do not actually mesh with the working of the genuine democracy.  But whatever we do whatever changes we bring about with regard to the Constitution I want to bring these changes about with the cooperation and willing cooperation with of the Army.
STEARNS: Why do you think the Army has engaged in this process of reform now?
ASSK: The process of reform was actually started by the executive and the legislature. It was President Thein Sein who started the reform process.  But of course you must remember that democracy is made up not of made up only of the executive, but the legislature and the judiciary.  The legislature has also played its part in promoting reform. The military are part of the legislature in that they are 25% of that, but I think they also work closely with the executive.  What we are lacking in Burma is an independence effective judiciary, and unless we have all three of these democratic institutions – strong and healthy, we cannot say that our democratic processes (is complete).
STEARNS: Is there something at present that you think made this a ripe time for these changes in Burma?  There are other regimes that have entrenched themselves…
ASSK: There were the elections in 2010 when they said they were turning the administration over to civilian government. Actually most of the people in the civilian government recently retired from the previous Army government, but they did have elections and there are many who question the fairness of the elections and even the United Nations has said these elections were flawed, but certainly was no longer officially a military government, it was a civilian government.  I think it is a civilian government which is close to the military because many of them are retired members of the military, but I think the desire for reform of President Thein Sein is very genuine. And now that I’ve been in a couple months in the legislature I can see that both the speakers of the upper and lower house also are very committed to the democratic process.
STEARNS:  We’ve had many questions on our Twitter feed about violence against Muslims and specifically how the treatment of Rohinja reflects some on the tenets of Buddhism. What do you think of that?
ASSK:  Communal tensions are very, very difficult to dissipate in a short time and there have been communal tensions in Burma for decades.  The latest episodes of violence erupted because of, from my point of view, from a lack of rule of law. It all started with a criminal act, and if action had been taken quickly, if justice had been done and seen to be done, it would not have escalated in the kind of almost full-scale violence that it did. We believe as a National League for democracy that human rights must be protected by the rule of law, and there can never be occasions where human rights can be neglected or ignored or the rule of law set aside.
STEARNS: What about efforts to trying to find a lasting solution to the Karen and Kachin issues as well.

ASSK: Lasting solutions are always difficult to come to. But they will have to persevere. I’ve been repeating ad nauseam that we in Burma we are weak with regard to the culture of negotiated compromises, that we have to develop the ability to achieve such compromises.  If you want to bring an end to long-standing conflict, you have to be prepared to compromise.  If either or both sides insist on getting everything that they want – that is to say 100 percent of their demands to be met, then there can never be a settlement. So we have to negotiate the kind of compromise that is acceptable to all the parties concerned.

STEARNS: A question to you from Facebook: What role do you think of the role of the the Burmese artists and authors can play in the social changes that are undergoing?
ASSK: Burmese authors and artists can play the role that artists everywhere play. They help to mold the outlook of a society — not the whole outlook and they are not the only ones to mold the outlook of society, but they have an important role to play there. And I think if they take up this role seriously and link it to the kind of changes were wish to bring about in our country they could be a tremendous help.
STEARNS: Can you speak to us for a moment about the need to improve primary education in the country as well as a means of preparing this next generation of Burmese?
ASSK:  We need to improve education in the country –  not only primary education, but secondary and tertiary education. Our education system is very very bad. But, of course, if you look at primary education, we have to think in terms of early childhood development that’s going back to before the child is born – making sure the mother is well nourished and the child is properly nurtured. Early childhood development has proved to be very beneficial and very cost-effective in societies where this is been tried. So let’s not confine ourselves to primary education.  Let’s think of early childhood development and education as a whole.  But at the moment I would like to emphasize the need for vocational training, for non-formal education in our country to help all those young people who have suffered from a bad education.  They have to be trained to earn their living. They have to have enough education vocational training to be able to set up respectable lives for themselves.
STEARNS: There are many foreign investors interested in coming to Burma, especially with the lifting of trade sanctions. Do you see a role for the private sector to play in supporting that vocational education?

ASSK: Of course. Already I am going to start a small vocational training program in my Township. We’ve bought a plot of land and were going to build vocational training center. This I’ve been able to do from funds contributed by private citizens.
STEARNS: Your country has a long history with China. Do you have any concern that the competition between China and the United States in that region could affect the development of a young emerging economy in Burma?
ASSK:  I don’t think we should think of it as competition between the United States and China. And if it is competition, I hope there will be healthy competition and not the kind of competition that is adversarial.  We don’t want this to be adversaries, we want them to be partners in developing that economic stability of the region.
STEARNS: Do you think United States has pressed China enough on its human rights situation?
ASSK:  I think you would know that better than I.
STEARNS: One final question. Another question from Facebook – In your years under house arrest, what is it that kept it going? Did you feel that it was just never going to end?
ASSK:  No I never felt it was never going to end,  and I didn’t really feel the need for anything to keep me going.  I felt myself to be on the path that I had chosen and I was perfectly prepared to keep to that path.
STEARNS: What would you say to people in other countries who are in similar situations, under house arrest, who look to you for inspiration?

ASSK: First of all I would say don’t give up hope. At the same time I would say there is no hope without endeavor.  You’ve got to work, you got to make an effort.  It is not enough to sit and hope. You have to work in order to realize your hopes.
——————————