Clashes at sea. Disputed borders. It is not the usual stuff of science. But researchers and scientific journals are being pulled into long-simmering border disputes between China and its neighbours. Confrontations involving research vessels are raising tensions in the region, while the Chinese government is being accused of using its scientists’ publications to promote the country’s territorial claims.

Mine, all mine: the rush to claim minerals and oil is driving China’s marine ambitions. Source: CHINAFOTOPRESS/GETTY

China’s desire to increase its exploitation of the sea is no secret. The country’s 12th five-year plan, which covers 2011–15 and was approved in March, was the first to mention the importance of a marine economy. In May, China’s Ocean Development Report estimated that marine industries, including offshore oil and gas exploration, fisheries and ship building, will earn 5.3 trillion renminbi (US$830 billion) by 2020. Last month, Zhang Jixian, head of the Chinese Academy of Surveying and Mapping, announced that the country will ramp up efforts to chart what he described as its “three million square kilometres of water territory”, an area much larger than that considered by neighbouring states to be Chinese territory. The mapping project will be aided by China’s first cartographic satellite, to be launched in December, and the Jiaolong submersible, which is scheduled to take humans to ocean depths of 7,000 metres next year. If the dive succeeds, China will capture the record for the deepest-ever manned ocean exploration from its great marine rival, Japan. 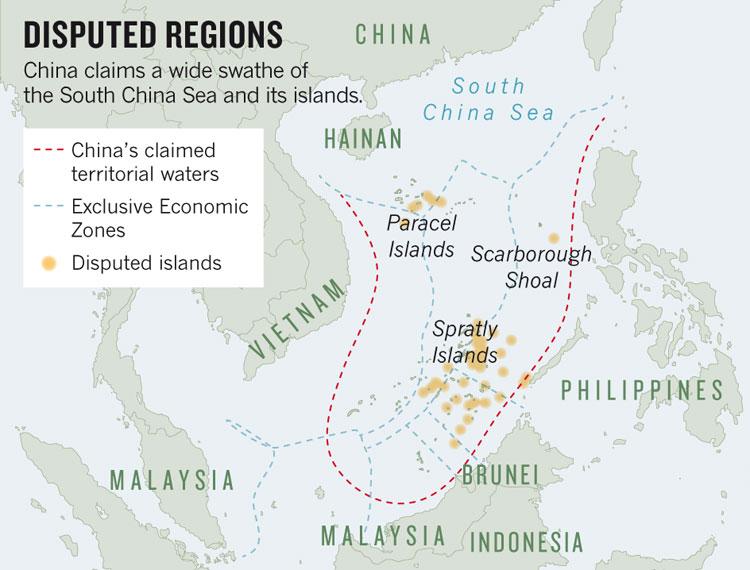 China is also growing increasingly assertive over its boundaries (see map). China claims Taiwan, for example, whereas Taiwan claims that it is independent. Japan, China and Taiwan all claim the uninhabited Senkaku Islands in the East China Sea. The clashes are fiercest in the South China Sea, where China claims the Paracel Islands (home to turtles, seabirds and a few Chinese troops) and the Spratly Islands, an archipelago of more than 700 isles, along with a huge area of the South China Sea surrounding them. Vietnam, Malaysia, Taiwan, Brunei and the Philippines all argue that those areas fall within their exclusive economic zones, which are recognized by the United Nations. The disputes are decades old, but reports of oil deposits — estimated at anywhere from 1.6 billion to 21.3 billion recoverable barrels — and significant mineral resources are now raising the stakes.

Because exploration often goes hand in hand with research, scientists are finding themselves on the front line. In June, Vietnam accused a Chinese fishing vessel of ramming a seismic survey ship working for the state energy company, PetroVietnam. And on 26 September, Japan ordered a Chinese research vessel that seemed to be conducting a marine survey to leave the exclusive economic zone that Japan claims around the Senkaku Islands.

The battle is also spilling over to the pages of scientific journals. Critics say that Chinese researchers are trying to make their country’s possession of the South China Sea a fait accompli by routinely using maps that show its extended marine boundaries. For example, a 2010 review of the impacts of climate change on water resources and agriculture in China, published in Nature, included a map with an inserted area that implied that most of the South China Sea was part of China.

Last month, in an online posting that was also sent to Nature and other journals, 57 Vietnamese scientists, engineers and other professionals living around the world complained about the use of such maps. The letter laments the Chinese government’s use of “‘back door’ tactics”, and argues that it is “using your magazine/journal as a means to legitimize such [a] one-sided and biased map”. A map that appeared in a review of Chinese demography published in Science provoked similar criticism. Science responded with an Editor’s Note stating that the journal “does not have a position with regard to jurisdictional claims” but that it is “reviewing our map acceptance procedures to ensure that in the future Sciencedoes not appear to endorse or take a position on territorial/jurisdictional disputes”.

Meanwhile, Michael Oppenheimer, a geoscientist at Princeton University, New Jersey, who is co-editor of Climatic Change, has received a barrage of e-mails since June from scientists contesting a Chinese map that his journal published more than four years ago. The map includes a thick ‘cow-tongue’ shaped dotted line that claims for China a wide swathe of the South China Sea, reaching down towards Malaysian Borneo. The scientists, from Vietnam, Finland, Canada and elsewhere, are demanding a correction to the map. But this kind of highly politicized debate over territory “is not a question that a journal like ours wants to deal with”, says Oppenheimer.

Other Vietnamese scientists contacted by Nature were most angered by instances of what they consider to be gratuitous uses of the cow-tongue map. “They include the line around the South China Sea even when this region, and the islands within it, have absolutely zero relevance to the topic,” says Q. Tuan Pham, a chemical engineer at the University of New South Wales in Sydney, Australia.

Why Chinese scientists include the controversial map in their papers is not clear. Following the e-mails, Oppenheimer decided that the disputed map had no relevance to the conclusion of the paper in question, and suggested that the lead author, Xuemei Shao of the Institute of Geographic Sciences and Natural Resources Research in Beijing, change it. Shao refused, explaining in an e-mail that the figure “is requested by the Chinese government”.

Jingyun Fang, a climate-change specialist at Peking University in Beijing who was a co-author on the Nature review, says that he included the insert because “we should follow China’s law to include these Chinese seas in the map”. Neither Fang, Shao nor any of four authors of other articles that included similar maps responded to requests from Nature for details of these regulations.

Science, Nature and Climatic Change have ultimately decided not to remove the offending maps. But Tuan Nguyen, a professor of medicine at the Garvan Institute of Medical Research in Sydney, who has independently complained to journal editors about China’s maps of the South China Sea, says that maps in journals should be treated as scientific data and verified before publication. “The publication of such a map represents an abuse of science,” he says.