More than 200 Hoa Sen University staff, lecturers and students participated in the annual Terry Fox Run charitable fundraising program on November 25, 2012 at the Crescent Mall, Ban Nguyet Pool, Phu My Hung, District 7. The event is organized yearly by the Canadian Chamber of Commerce and Consulate General of Canada in HCM City. 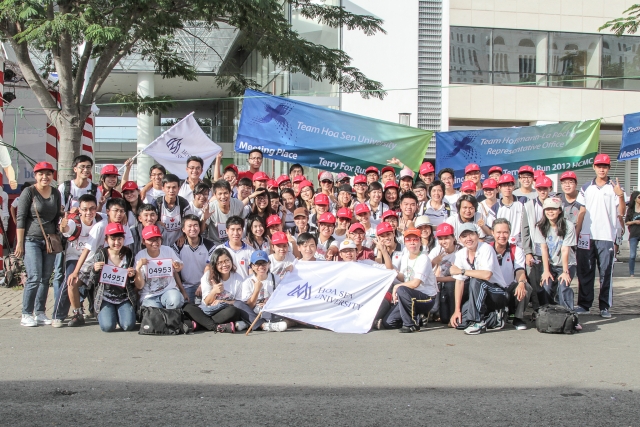 The 15th Terry Fox Run charitable program, greatly exceeding previous years in attendance, recieved the support of over 14,500 participants from many organizations, companies, and families. Representatives of the Student Support Department and of other departments at Hoa Sen University collected 23,030,000 VND and presented it to the Terry Fox Fund.

Terry Fox was a Canadian cancer patient. In 1980, although his right leg was amputated, he started a plan called Marathon of Hope by running to raise money and enhance awareness for cancer research. His cancer became more and more serious and consequently forced him to discontinue after running 5,373km in 143 days. In order to acknowledge his efforts, the Consulate General of Canada in HCM City in collaboration with the Canadian Chamber of Commerce holds an annual Terry Fox Run to raise money for the charitable organization to fund cancer research. This program has been held on a large scale in over 60 countries. In Vietnam, this program named the Terry Fox Run was first held in 1997 and so far has had 15 successful organizations with the participation of a large number of interested people.

By Thien Tan-Translated by Anh Dung