At the Grand Plaza Hotel in Hanoi in a contest finale named “Students and Information Security” held on November 23, 2012, the HSEC Team of Hoa Sen University won the National 4th prize. 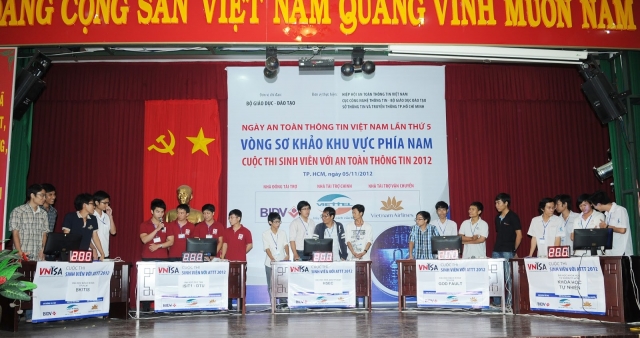 Image of the primary contest round in the southern area

To reach the finale, the HSEC team outperformed 25 of 28 contestant teams and became one of the top 3 teams in the Southern Vietnam area, which included the BKITIS team at the HCMC University of Technology; and the ITIS1–DTU team at the Duy Tan University in Danang.

The HSEC team competed with these two teams at the finale, and also the three best teams of 21 contestants in the Northern Vietnam area. They were: the InfoSec team and the ACT team from the Academy of Cryptographic Techniques, and the K54CNTT team from the University of Technology- Vietnam National University, Hanoi (VNU).

The finale of this year’s contest included numerous novel features compared with those of previous years. The finale examination questions  were devised by Secunia, a high-prestige security team, who sent them to the Organization Board in Vietnam five minutes before the contest began. Six contestant teams were required to be on line simultaneously and logged into the online examination system. At the same time, six online examiners in Europe monitored and directly evaluated the results of the contestant teams, and updated their marks online via an assigned web. 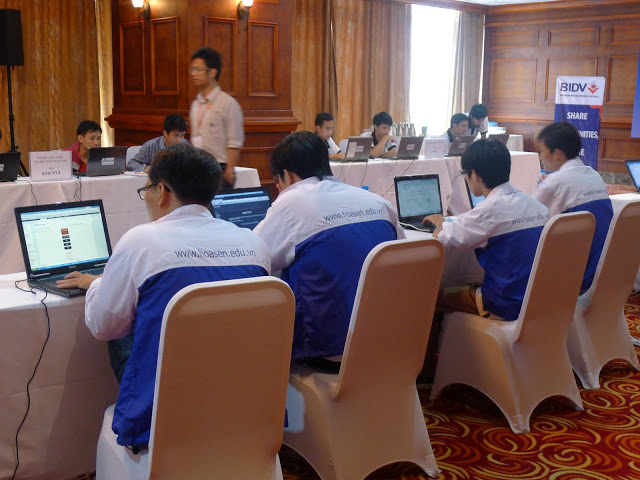 This year’s contest was held in the form of war-games. The Organization Board formed a war-game page with different challenges and tasks according to set levels of difficulty; the teams tried their best to achieve these levels. There were three levels in all, each level consisting of 10 questions. The exam questions were written using the following structure: the problem plus part of a review for technical orientation; then the teams had to work out the best way to solve the problem to reach a solution. The teams were awarded one mark for each correct answer. From Level 1 to Level 3, the degree of thinking increased correspondingly, and the role of mechanical techniques decreased more and more. This year the questions were in English; some of them with the addition of Hungarian. Their main topic was heavily weighted towards two central fields in information security, Cryptography and Steganography; and trending toward Forensic Investigation. 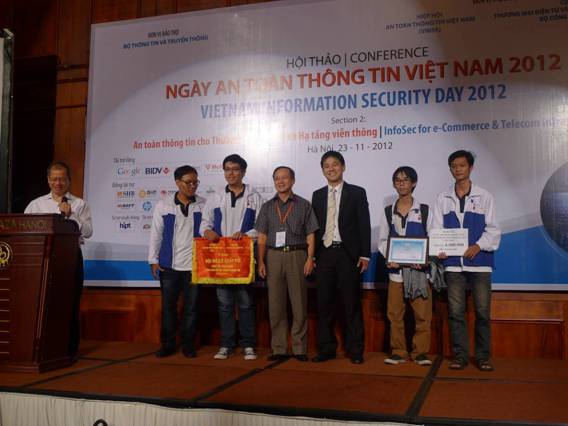 Image of awarding the prizes to the Final Winners